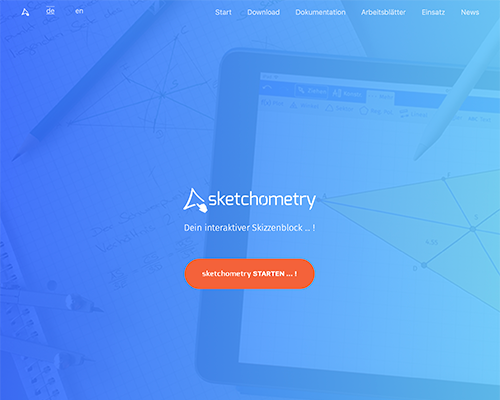 In the new Worksheets section you will find worksheets prepared for school use and valuable information on how to use them in the classroom.

sketchometry v1.5.2 brings improvements mainly for iOS devices: The speed of the sketchometry app has been drastically improved. Additionally, the “Share” menu is enabled for storing a construction (use “Save to file…“). This automatically allows to use all cloud services which are supported by the device.

sketchometry v1.4.4 fixes two minor problems: Dragging of labels does work again and hiding of polygons missed a point. Furhter, the reflection of arcs, sectors and angles is not supported in this version.

sketchometry v1.4.3 fixes some problems on Android and Microsoft devices.

This release contains a subtle but important change: manipulating a line or polygon with two fingers on a touch device does not longer scale the object. From now on it is only rotated and translated. This opens up many didactical opportunities.

A few days ago we released sketchometry version 1.4.0. We are very proud that sketchometry is now also available in Greek, the language of the founders of Geometry.

A new feature is that one can create mirror images of lines, circles, curves and polygons directly with the mirror gesture.

Another visible change is we adapted the measuring notation to the German curriculum, e.g. the length of the segment defined by the points A and B is now displayed as |AB|.

Starting with this version, the amount of constructions that can be stored in sketchometry is limited only by the disk size of the device.

Besides the usual bug fixes, another new feature is that sketchometry is now PWA-ready (PWA: progressive web app). For the time being, this means:

This release 1.3.5 fixes two bugs: short, straight scribble curves got the wrong position and the undo button did not work on certain devices.

In this release 1.3.4, smooth scribble curves are introduced. This is the first step for doing calculus with sketchometry. Then, polygons can be reflected on a line or point (as well as points, lines and curves). Glider points can be set into “snap-to-grid” mode. Finally, some annoying bugs could be fixed.

We already use drag mode to move objects around and we activate construct mode to create new objects with intuitive gestures - that’s sketchometry. 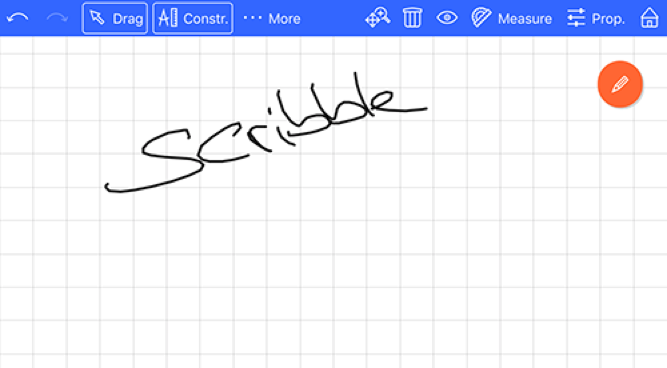 With scribble mode you can make annotations by hand or you can highlight special areas by hatching. Every scribble line is a new object with its own properties.

But scribble mode is more: Every scribble line is a curve, which can be used as a sketchometry object, e. g. you can use the gesture line reflection to reflect your scribble curve at a given line: 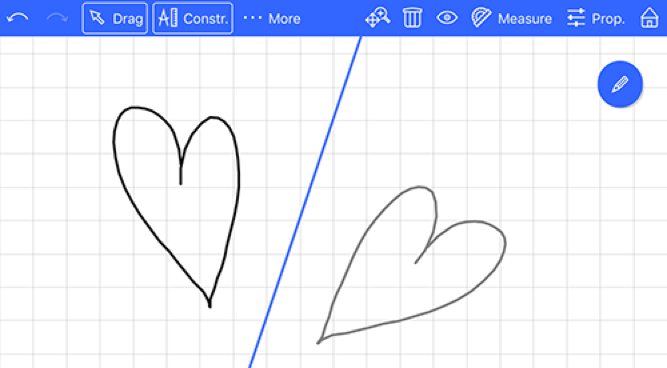 And even better you can put gliders on a scribble curve: 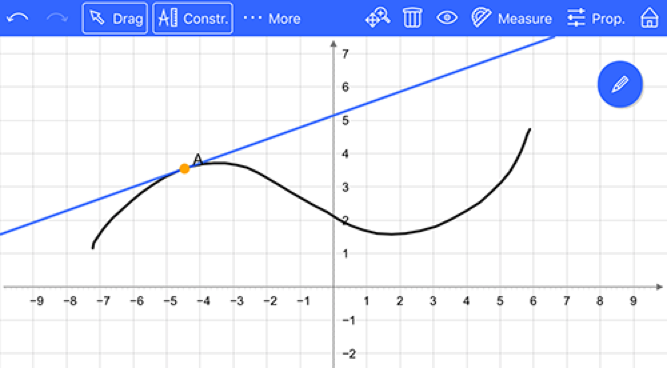 Version 1.3.0 introduces the scribble mode, which allows you to draw in a construction.

Lines and curves may now be reflected directly across a line of reflection or a point of symmetry.

Moreover, constructing on multi-touch devices has been made more robust against unintended touches.

Version 1.2.8 is mostly a bug fix release. In particular, the latest versions of the Internet Explorer and Edge refused to handle touch input in sketchometry.

Further, we are very happy that sketchometry is now available in Arabic.

There is a small change in the input language for texts and function plots. Starting with this release, function names consisting of more than one letter are spelled with lower letters, only.

The most notable new feature in version 1.2.7 are symbolic derivatives for function plots. For example, the input

Further, this release fixes some bugs. For instance, checkboxes in the properties dialog should work now as expected.

Version 1.2.5 comes with the new languages Russian and Kazakh. It improves the input of mathematical expressions for point coordinates and circle radius. This opens many possibilities for advanced constructions which will be highlighted in a further blog post. Zooming by mouse wheel is enabled again, as well as individual scaling of axes.

Version 1.2.4 comes with the new languages Czech, Norsk, Suomi, and Traditional Chinese. It improves stroke recognition, zooming and audio support. Further, the user interface has been slightly simplified. The most important bug fixes are: cloud support and check boxes in the property dialog.

The main improvement against version 1.2.1 is that languages are now handled correctly: If there is no translation available, sketchometry falls back to English instead of Chinese (sic).

The online version and the chrome app are available. Android, iOS and firefoxOS will follow soon.

sketchometry is now also available as app for Windows 8.1+ in the Microsoft Windows store.

Let’s suppose that sketchometry is embedded in the web page in an iframe with id sketchometry. Then, the hosting web page is communicating with the sub-object contentWindow of the iframe’s DOM node:

the variable URL contains the URL where sketchometry is loaded from. Here, one can use either https://embed.sketchometry.org or download the zip file containing sketchometry and put it on a dedicated web server.

The only situation where sketchometry sends a message back to the hosting web page is after a save message. Before the hosting web site can receive postMessages from an iframe an eventhandler for the event message has to be customized. Examples:

But first, the saving of a construction has to be triggered by a save message:

Here is an example of a hosting web page which enables the control of sketchometry by buttons:

The live demo of this example is at https://embed.sketchometry.org/iframe.html.

As always, version 1.2.0 is already available on https://sketchometry.org and on Chrome Web Store. The other app versions (iOS, Android, firefox OS) will follow soon.

The most notable improvements are:

At the time being, version 1.1.9 is available on https://sketchometry.org and on Chrome Web Store. The other app versions (iOS, Android, firefox OS) will follow soon.

The most notable new features are:

At the time being, version 1.1.8 is available on https://sketchometry.org and on Chrome Web Store. The other app versions (iOS, Android, firefox OS) will follow soon.

Today we released sketchometry version 1.1.6. This release fixes some bugs and contains a language update. Android app and iOS app will be available in a few days.

Today we released version 1.1.5. In this version plotting of function graphs is improved and much faster.

Apps for iOS, Androidare already available, the firefoxOS app will be published in a few days.

Today we released version 1.1.4. It fixes a severe problem with version 1.1.3 on iOS 7. Some minor issues were fixed, too.

As usual, the apps for iOS, Android and firefoxOS will be published in a few days.

Since version 1.1.3 the sketchometry apk file is available for download. You can use it to run sketchometry on Blackberry or other compatible devices.

Last week we released sketchometry version 1.1.3 in all versions: web page, iOS app, Android app and FirefoxOS app. The iOS app has been approved by Apple now and is available for updating.

This release fixes two annoying bugs on iOS: in iOS7 sketchometry crashed when the touch keyboard was used, in iOS 8 the status bar covered sketchometry.

The most notable new feature that has been introduced in this release is that texts are now editable in the property dialog.

Languages: sketchometry has new volunteers to translate the user interface. The new languages are Japanese, Russian, Serbian and Ukrainian. Some translations are not be complete yet, but already now, many thanks go to the translators for their excellent work!